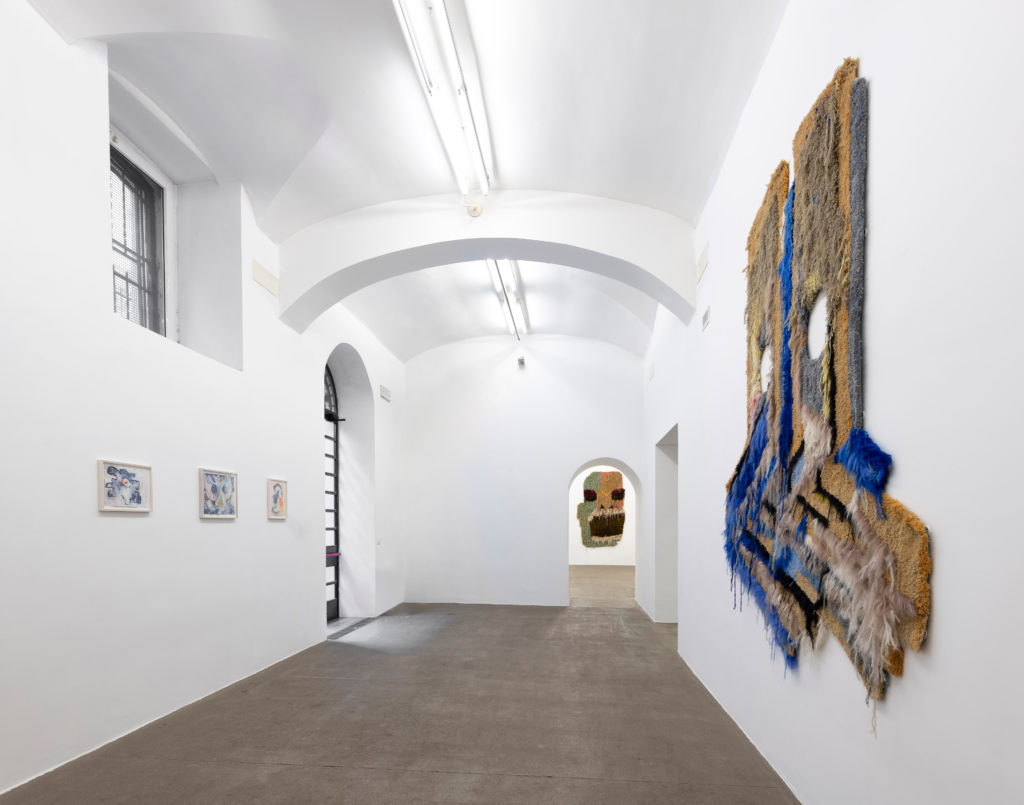 Tapestry, watercolours, basketwork and ceramics are traditional techniques that Caroline Achaintre uses to create her carnival of the absurd. The exhibition reveals the wide range of her output with a group of previously unseen works as well as pieces produced especially for Montpellier. She is creating her own distinctive exhibition design and making three new wicker sculptures with local artisans.

Pierre-Olivier Arnaud was born in 1972. He lives and works in Lyon. His work is based on the image, that is to say the image as a motif but which tends to disappear. He questions the status that the images he collects can have, a status that is relatively blurry because of the very precariousness of these motifs and their identity. Perhaps this is why the artist does not define himself as a photographer, who takes an image for what it is and gives it to be seen in an immediate and literal way. On the contrary, it is with the invisible, fragile qualities of images, in their non-obviousness and in the representations and interpretations they can give rise to, that Pierre-Olivier Arnaud works with. Moving away from a concrete look at the image, he produces a multitude of often abstract motifs, almost always in black and white, blurring our established vision and “de-sublimating” the visible. The image thus dissolves “at first reducing the motif to bring us, in the next stage, to get closer to it and look at it in detail” (1). The artist’s works are a somewhat dark, direct and honest vision of the world: inviting us to look at things differently, going beyond the evidence of glossy aesthetics and penetrating the identity itself of an image.

Born in France in 1969, raised in Germany and based in England, Caroline Achaintre attended the Kunsthochschule in Halle, then the Chelsea College of Art and Design, and the Goldsmiths University of London. The artist is nourished by multiple and radically different cultural references that influence her approach. With her sculptures made of wool, ceramic and with her watercolours, the artist appropriates each space to install her hybrid creatures, transforming the exhibition space into a theater where a dialogue between different characters half-fantastic, half-ghostly can take place. Inspired at once by European carnivals, primitivism, German Expressionism and science fiction, Caroline Achaintre’s work on the one hand evokes the possible coexistence of several characters within a same being as well as the tensions generated by duality. No precise indication is given as to how to approach the work of Achaintre. We see in turn a mask, a garment, an animal… Her works have the particular feature of being difficult to define. At once abstract and figurative, they reveal anthropomorphic forms and indicate a particular interest for animism. The mutation of forms and the plurality of possible interpretations engage the mind and the whim of the viewer. This is the strength of Caroline Achaintre’s work: to question our own capacity to be in the world as individuals defined by complex and multiple identities.

For this new exhibition at the Palais de Tokyo, Ulla von Brandenburg has imagined a total, evolving project, inspired from the theatre, as well as its imaginary and conventions. Around the notion of ritual, understood as the possibility to explore the relationships between individuals and groups, and to create or not to create something in common, the artist invites the public to take part in an immersive and renewed experience of the themes, forms and motifs that feed into her work: movement, the stage, colours, music, textiles…

Art : Concept is pleased to announce the release of Hubert Duprat’s new book: The Caddisfly’s Mirror.

Orders from abroad can be made directly to the publisher at this address : contact@fage-editions.com